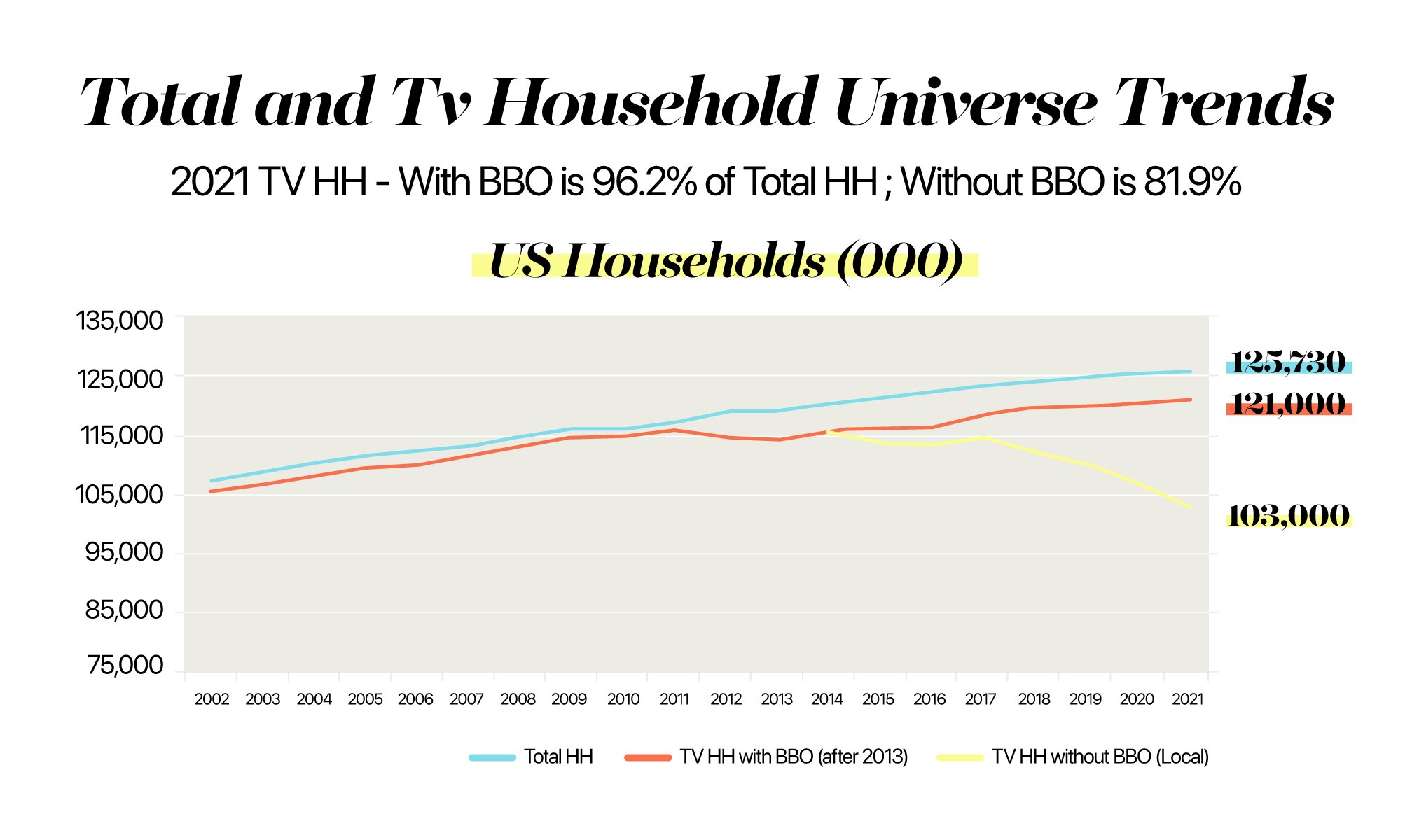 In our continuing series of understanding the changes in media usage and measurement, we are looking at TV viewing and consumption habits. Inevitably, your TV viewing habits changed over the course of the past 12 months; if you are like most people, you watched a lot more TV. Most of us watched TV while staying safer at home, but often in new and different ways. For many years now, cable subscriptions are declining as the price of going streaming-only with so many increasing options becomes a more affordable alternative as cable subscription prices rise.

Maybe you cut the cord to save some money and rather than subscribing to cable, you use your internet and subscribe to services like Philo or YouTube TV with the ability to watch live television. Additionally, we have more options than ever to use a TV app like NBC.com or ABC to stream content. Netflix is still commercial-free, and the behemoth of streaming options, but Disney+ already has already accumulated over 100 million subscribers since its launch 18 months ago, with half the estimated subscribers of Netflix.

Ad techs competing in the Digital space often tout ‘TV is dying’ yet TV viewing is actually growing. It is just being consumed in increasingly non-traditional ways. That’s where ratings companies, particularly Nielsen, have been looking to capture these streaming audiences more clearly. While Nielsen and television stations know that population, and therefore the number of TV households is increasing, the viewership of specific programming is flat or decreasing. When the TV universe (total potential viewers in a given geography) increases in size and the number of persons viewing a particular program don’t increase proportionately – ratings go down, but impressions go up. This is because ratings are calculated as a percentage of total TV households, e.g. 1.0 Rating = 1% of the demographic audience.

Since the inception of commercial television, there were only a few channels to choose from with measurement companies like Nielsen starting to look at and evaluate these audiences in the 1950s. Back then, we measured the total number of households viewing TV and which network had the highest Share or percentage of that audience. Decades later, we have the highest fragmentation of audiences in the 21st Century with hundreds of options to view video content. To keep up with this trend of more accurate measurement, Nielsen announced it will evolve its methodology to include cord-cutter TV homes, calling them “broadband only” households, or BBO for short.

Starting this spring, ratings will include the live/linear viewers on traditional Broadcast/Cable TV as well as the BBO viewers of a particular program. This can only be measured directly when the streaming version of a program occur simultaneously with the live version and carry the same ad commercials. In other words, previously, spot-market advertisers who relied on Nielsen Ratings for a particular program were not getting the parallel streaming viewers. These parallel streaming viewers were an uncounted bonus, but now that will change.

Ratings represent a percentage of the TV universe. As I mentioned – if the universe gets bigger, it is likely the ratings will get smaller. Now, stations and Nielsen and agencies are moving to compete with other mediums in a more comprehensible way by using impressions as currency rather than ratings. Increasing impressions look better than declining ratings, and more accurately measure your target audiences’ representation of viewing.

As consumer viewing and media usage habits change with evolving technology, so must the media measurement model to accurately portray the audiences. In the era where the TV screen was the only choice to consume video content and audiences were not fragmented, ratings easily met the needs of buyers and sellers. However, the world around us has drastically changed.

Stay tuned for more changes in digital measurement and optimizations because in this constantly evolving world, change is inevitable.