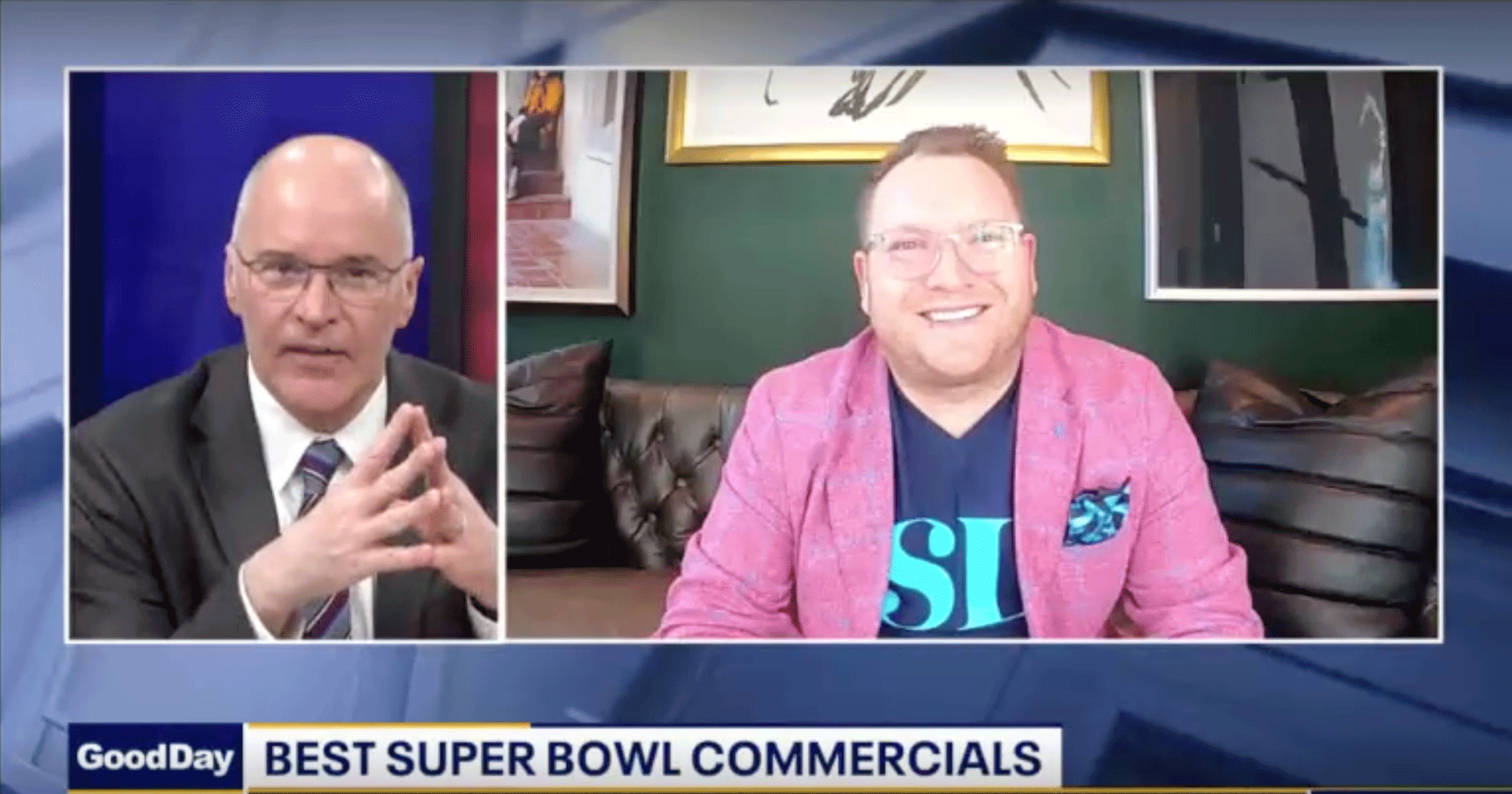 Is the Super Bowl a world-class sports event with cool commercials – or a showcase for the most über-awesome ads of the year with a little football? Not surprisingly, I’d say the latter, and this year’s commercials lived up to that reputation and more.

Luckily, I got an amazing opportunity to share my thoughts on this when I was invited to appear on Fox 13’s Good Day Tampa Bay and talk with Russell Rhodes on the best and worst commercials from this year’s big game, and I’m excited to share some here. And I also have some highlights from our first-ever Schifino Lee Ad Bowl that we launched to gather everyone’s input on what the best Super Bowl commercials of all time are.

Whew, it wasn’t easy to narrow down the ads to the top and bottom ones. But it was a total blast for an ad junkie like me to watch all the spots and find out what zany story lines ,and surprise celebrity appearances would steal the spotlight in this year’s commercials.

Click on this link or the image below to see a clip from our interview. 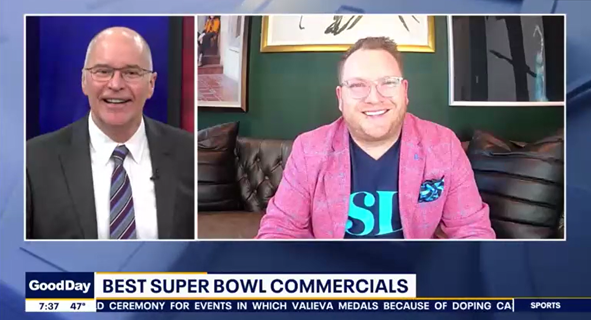 Seriously, though, besides getting my ad junkie fix, it’s crucial for us marketers to stay on top of the latest sensations and trends in Super Bowl commercials for many other reasons. Among those, the game offers one of the few opportunities for brands to reach more than 100 million Americans at a single time – and television networks know it. Last year, the cost of a 30-second ad slot was roughly $5.6 million, a number that can tell you a lot about how much the cost for a Super Bowl commercial has skyrocketed over the years when you consider that a slot for the 1970 Super Bowl was a measly $78,200 (about $562,000 today).

With the stakes so high, it’s imperative to understand what makes the latest Super Bowl ads work so we can use these insights to help our own agencies and companies in our advertising work. With that in mind, here are the top five commercials I talked about with Russell that I judged as the best of the best and why. Do you agree? See what you think.

5. Rocket Mortgage, “Dream House with Anna Kendrick and Barbie”
Actress Anna Kendrick is here to help Barbie through the process of buying her dream house. But – watch out! — Barbie faces competition from Better Offer Betty, Cash Offer Carl and House Flipper Skipper. Luckily, Barbie is already approved by Rocket Mortgage, so she still wins. The spot superbly captures the style of Barbie commercials.

4. Squarespace, “Sally’s Seashells”
Airing at the same time as the Super Bowl was the newest episode of Euphoria, on HBO, starring Zendaya. She also did double duty by appearing in this ad as the titular Sally Seashell, who uses Squarespace to build her business selling seashells.

3. Lay’s, “Golden Memories”
Buddy comedies usually always score big during the Super Bowl, and this one was no exception. It was hilarious to see Paul Rudd and Seth Rogen enjoying some sensitive bro time over bags of Lay’s potato chips that were present for fond memories, including taking a road trip, getting kidnapped by a stalker, buying a house haunted by evil spirits.

2. Amazon, “Mind Reader”
Kudos to this spot by taking us inside the marriage of Scarlett Johansson and Colin Jost and what it would be like if their Alexa digital assistant could read their minds. Hilarious! Even though they make the product they’re advertising look not that great to buy.

1. Toyota, “Brothers”
(Sob.) Extremely touching commercial about two Paraolympian brothers came on and demonstrated the tight bond of brotherhood and the triumph of success no matter the insurmountable obstacles. A heartbreaker!

Coca-Cola’s “Early Showers” Wins the First SL Ad Bowl
To help get everyone ready for this year’s commercials and share our perspective on the top commercials that best represent this storied American tradition, we launched our very own competition, the Schifino Lee Ad Bowl. Starting on Jan. 28, we took what we chose as 16 iconic commercials and put pairs of them in head-to-head competitions where we asked everyone to vote on Instagram polls for the one they thought was best.

The contenders included all the classics, from the Snickers “Betty White” ad and Budweiser “Frogs” spot from the 2010s, to the McDonald’s Larry Bird and Michael Jordan “Showdown” commercial and Wendy’s “Where’s the Beef?” ad from the early ‘90s and mid-‘80s, to the Apple “1984” commercial and Coca-Cola “Hilltop” from the mid-‘80s and early ‘70s.

As we progressed, we kept track of the winners and the successive rounds in a bracket similar to the one used for the Sweet 16 NCAA basketball championship series. 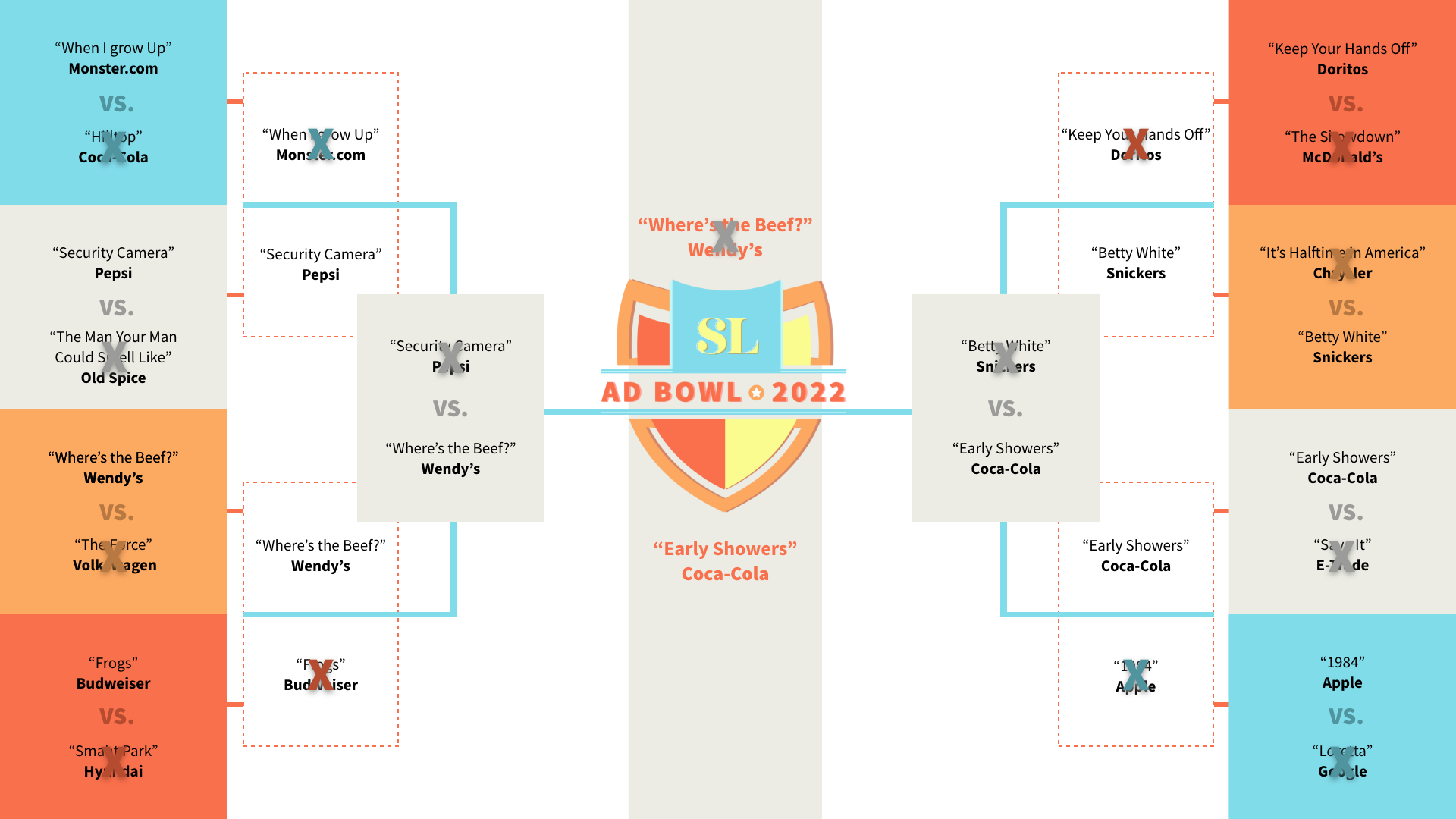 And as you can see in the bracket, the winner we announced just before last Sunday’s big game was the classic Coca-Cola “Early Showers” Mean Joe Greene ad, where then Pittsburgh Steelers defensive lineman Mean Joe Greene threw an awestruck young fan his jersey in appreciation for the Coke that the kid shared with Greene as he was heading to the showers early after a game injury.

Thank you to everyone who participated in the Ad Bowl, and stay tuned for similar contests where we use our perspective to shed light on the latest news and trends in advertising.